Gilbert Keith Chesterton - The Man Who Was Thursday (1946) 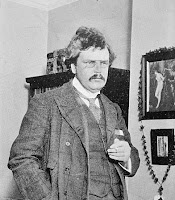 ““With pleasure, if you don’t mind hearing my story,” replied the eminent foreign philosopher. “I am by profession an actor, and my name is Wilks. When I was on the stage I mixed with all sorts of Bohemian and blackguard company. Sometimes I touched the edge of the turf, sometimes the riff-raff of the arts, and occasionally the political refugee. In some den of exiled dreamers I was introduced to the great German Nihilist philosopher, Professor de Worms. I did not gather much about him beyond his appearance, which was very disgusting, and which I studied carefully. I understood that he had proved that the destructive principle in the universe was God; hence he insisted on the need for a furious and incessant energy, rending all things in pieces. Energy, he said, was the All. He was lame, shortsighted, and partially paralytic. When I met him I was in a frivolous mood, and I disliked him so much that I resolved to imitate him. If I had been a draughtsman I would have drawn a caricature. I was only an actor, I could only act a caricature. I made myself up into what was meant for a wild exaggeration of the old Professor’s dirty old self. When I went into the room full of his supporters I expected to be received with a roar of laughter, or (if they were too far gone) with a roar of indignation at the insult. I cannot describe the surprise I felt when my entrance was received with a respectful silence, followed (when I had first opened my lips) with a murmur of admiration. The curse of the perfect artist had fallen upon me. I had been too subtle, I had been too true. They thought I really was the great Nihilist Professor. I was a healthy-minded young man at the time, and I confess that it was a blow. Before I could fully recover, however, two or three of these admirers ran up to me radiating indignation, and told me that a public insult had been put upon me in the next room. I inquired its nature. It seemed that an impertinent fellow had dressed himself up as a preposterous parody of myself. I had drunk more champagne than was good for me, and in a flash of folly I decided to see the situation through. Consequently it was to meet the glare of the company and my own lifted eyebrows and freezing eyes that the real Professor came into the room.

“I need hardly say there was a collision. The pessimists all round me looked anxiously from one Professor to the other Professor to see which was really the more feeble. But I won. An old man in poor health, like my rival, could not be expected to be so impressively feeble as a young actor in the prime of life. You see, he really had paralysis, and working within this definite limitation, he couldn’t be so jolly paralytic as I was. Then he tried to blast my claims intellectually. I countered that by a very simple dodge. Whenever he said something that nobody but he could understand, I replied with something which I could not even understand myself. ‘I don’t fancy,’ he said, ‘that you could have worked out the principle that evolution is only negation, since there inheres in it the introduction of lacuna, which are an essential of differentiation.’ I replied quite scornfully, ‘You read all that up in Pinckwerts; the notion that involution functioned eugenically was exposed long ago by Glumpe.’ It is unnecessary for me to say that there never were such people as Pinckwerts and Glumpe. But the people all round (rather to my surprise) seemed to remember them quite well, and the Professor, finding that the learned and mysterious method left him rather at the mercy of an enemy slightly deficient in scruples, fell back upon a more popular form of wit. ‘I see,’ he sneered, ‘you prevail like the false pig in Aesop.’ ‘And you fail,’ I answered, smiling, ‘like the hedgehog in Montaigne.’ Need I say that there is no hedgehog in Montaigne? ‘Your claptrap comes off,’ he said; ‘so would your beard.’ I had no intelligent answer to this, which was quite true and rather witty. But I laughed heartily, answered, ‘Like the Pantheist’s boots,’ at random, and turned on my heel with all the honours of victory. The real Professor was thrown out, but not with violence, though one man tried very patiently to pull off his nose. He is now, I believe, received everywhere in Europe as a delightful impostor. His apparent earnestness and anger, you see, make him all the more entertaining.””